How to Recognize the Different Natural Stones The natural stones in the world are unique and beautiful, each one with its personality. If you're new to stones, it can be difficult to tell different them apart. Marble, granite, or onyx may look the same to you. However, there are a few different ways that you can recognize them. This blog post is a basic beginner guide exploring how to recognize the different stones.

Most marbles have veining of sorts. The veins could be minerals of different color within the texture of the stone, or they could be natural staining of the stone occurred during its formation. Granite seldom has any veining, and even those that present veining have a grainy-looking surface.

In addition, marble scratches easily. You can "key" marble, but you can't "key" most granites. This is one quick way to tell the two stones apart.

Another way to recognize marble from "granite" is the chemical approach: spill some lemon juice or white vinegar on a piece of marble, and within a few seconds, you will have a permanent etch mark due to the corrosive action of the acid on the calcite contained in the stone.

Such a test, however, has many shortcomings. For instance, most dolomitic marbles (White Thassos, Palissandro) and dolomitic limestone (Emperador) will not be easily damaged by citric or acetic acid. Even stronger acids will take a much longer time to corrode them. Green marble of the serpentine group (the vast majority) will not etch easily (if at all), either.

To etch all stones traded as granite, there's only one type of acid that will do it: hydrofluoric acid, which can be found in many popular rust-remover products. But then again, considering the wide variety of stones labeled as granite, many of them will be sensitive to certain acids that would not affect true geological granite and most other mercantile granites. So, once again, no blanket rules in this industry.

How to Recognize Travertine

Travertine is in a league of its own. Most popularly, it's traded (cut along its natural grain), its texture is quite distinctive, and always goes in one direction. A close inspection will also show the filler that the factory-applied. If a loose piece of travertine is available, the assessment of its back will show all the natural holes that have been filled in the finished side.

Learning how to recognize limestone from sandstone is a little bit easier. Limestone is either of a very uniform color (a characteristic seldom found in sandstone) or, in the case of the most compact ones, there's a display of fossil imprints, such as shells, plants, or bugs. Most of the time, both stones are grainy in texture; and if it becomes difficult to tell them apart, lemon juice or white vinegar could once again become the determining factor. Most limestones will be corroded where a little fizzing will be detectable, while many types of sandstone won't.

Slate is more straightforward to recognize due to the most popular way it's marketed, namely a natural-cleft finish. This means that the stone's surface is not smooth, but it presents ripples and ridges throughout. Some of them will de-foliate, and some layers of the stone will come off.

Differentiating between marble and compact limestone

Finally, there's a critical distinction to be made between marble and compact limestone. As seen before, the vast majority of the stones traded as marble are compact limestone. Being able to tell them apart is very important from a practical perspective, not just an educational exercise.

The crystalline structure of most true geological marbles explodes when subject to high stress. This phenomenon is known in the industry as stunned crystals. Compact limestone usually does not present such a problem. Knowing this is very important to a professional stone restoration contractor because stunned crystals cannot be repaired, and many times this type of damage appears to be something else, such as a deep scratch or a nick.

Deep scratches and nicks can be successfully repaired in compact limestone, and once the repair is finished, nothing will show. Deep scratches on marble are, more often than not, accompanied by stunned crystals under the scratch. The contractor will repair the scratch, but it will appear as if the scratch is still unscathed at the end of the job because of the white line that looks like a scratch, representing the stunned crystals.

Another example could be the nicks on marble surfaces created by the high spike heels of a woman's shoe. On an authentic geological marble tile, the stunned crystals can go as deep as the entire thickness of the tile; therefore, the repair of the surface nick would turn out to be a futile exercise, for the damage would still be completely obvious as if the repair had never been performed. In situations like these, it's hard to explain credibly afterward to the customer what happened, just as it will also be hard to get paid for the work performed.

How to tell authentic marble apart from compact limestone?

Get a spare tile and hit it with a hammer or another blunt object. Just the weight of the hammer dropped from a height of 3" or so will do. If it's genuine marble, damage that looks like a white grain of rice will appear. If it's compact limestone, it won't.

A particular example of extreme stress applied to a marble surface is moving a grand piano across a marble floor. Many grand pianos have three bronze wheels shaped like barrels, and all the weight of the grand piano is concentrated on the three tiny contact points of the wheels on the floor.

The rolling of those wheels on a true marble floor will create stunned crystals that could go as deep as ½" and look like long white scratches. Nothing would happen if the floor were compact limestone. The crystals of travertine will stun, although not as severely as if it were authentic marble.

This blog post should have helped you recognize the different stones and what they represent. For more information, including how to care for and repair various types of stones, check our website for more helpful tips. 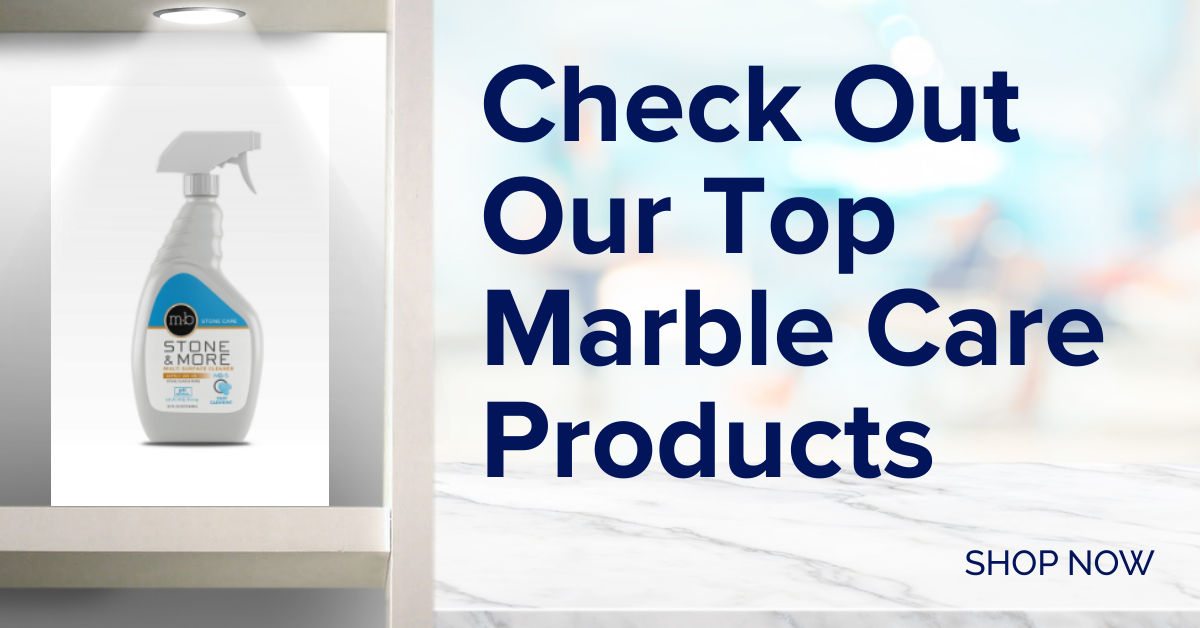